I’ve been in a bit of a breakfast rut lately. I usually end up doing the ultimate lazy breakfast of a halved banana sandwiched together with peanut butter and sprinkled with cinnamon (#onbrand). It’s partially to do with the weather, of course. London can’t decide if it’s sunny or grey right now so I’m often thrown by what to have. It’s also partially because I’ve been trying to eat vegan meals for breakfast & lunch now (for environmental reasons) and am so uninspired. A barely sweet breakfast muffin or quick-bread is what I’ve really wanted. Something with enough integrity to be toast-able but still cakey and soft. I wanted to be able to slather it with nut butter and fruit and call it breakfast without feeling crushed by a sugar low a few hours later. This is what I ended up making – a cinnamon-kissed toasting loaf made with wholemeal flour (gonna keep reminding everyone about fibre. Get your fibre guys, 30g a day) and walnuts and pumpkin seeds nestled into the batter.

I used yacon syrup to sweeten the loaf a bit – it’s full of oligosaccharides, sweet carbohydrate molecules which are prebiotics. They feed the bacteria in your gut (this sounds like it could be a bad thing but it’s a good thing). Don’t worry if you don’t have any, it’s not vital to the recipe so you can use cane sugar or maple syrup instead! I’ve also been kind of going off coconut oil ever since I read my friend Laura’s article about it on Huffpost and learned about the British Nutrition Foundation’s report on it. Turns out that yeah saturated fat is still bad for us, guys. Like all other saturated fats we should be mindful of our intake of them and coconut oil is no exception. Also turns out that loads of vegetable oil-based spreads still use dairy products in them. *sigh*.  Luckily flora has just come out with a new freedom spread which is completely dairy free so is suitable for my breakfast baking exploits! Now I’m not saying that anyone should go crazy eating vegetable oil spreads either – they’re still fat – but switching from butter to a dairy free alternative like this for breakfast is so much better for the environment. Aaaaand as it’s World Environment Day maybe you should try going dairy free for the day and try out this sweet potato loaf for breakfast! - for the cooked sweet potato I pricked a sweet potato all over with a fork and microwaved it for 5 minutes to cook it.

Thanks to Flora for sponsoring this post and supporting World Environment Day! 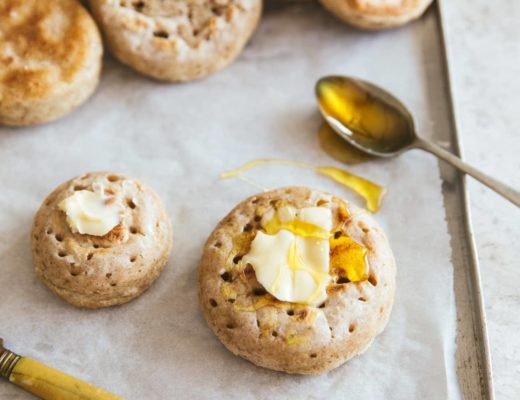 How to make Sourdough Crumpets (+Video)