This recipe for Mother Eve’s pudding is so lovely for a cool autumn evening when you want something comforting & sweet to serve up to your friends or family. This fruity pudding is extremely good served warm, and even better if you’ve got some custard to go with it!

You can switch out the apples for other seasonal fruits (rhubarb is a great one to try) depending on what you have to hand. You can also change the flavouring – this version uses grated lemon zest in the apples but it can be delicious to add clove, cinnamon, ginger or orange zest instead.

For the stewed apples:

Butter the dish & preheat the oven: 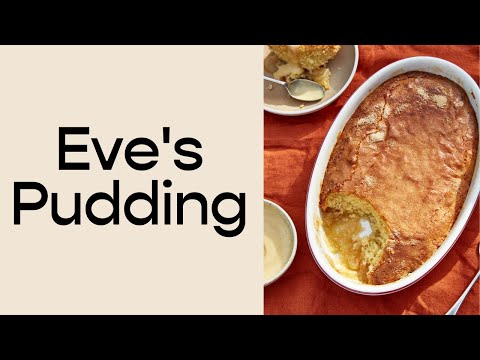 When it comes to classic English baking recipes, I turn to Mary Berry first! The only version of Eve’s pudding I could find mentioned in association with her was a ‘Spiced Eve’s Pudding‘ recipe from her complete cookbook. The apple filling in her recipe is flavoured with lemon zest and cinnamon PLUS it includes raisins – all certainly delicious ingredients to go with the apples. She also includes mixed spice which would lend a Christmassy flavour to the bake.

Next up, Jamie Oliver, whose Eve’s pudding also includes mixed spice in the cake batter. However the apples in his recipe are simply stewed with sugar only. He does include a bit of vanilla extract in the cake, too, which I think sounds delicious.

Of course Nigel Slater is another British cook who has covered this recipe. Interestingly, he doesn’t pre-cook the apples before adding them to the dish. Whilst this would still be tasty, I don’t think they would sufficiently break down into a saucy apple compote underneath the cake batter. As the apples are unflavoured, he instead adds lemon zest and vanilla to the cake batter for flavour.

Lastly, I tried to search for a Delia Smith version of which I couldn’t find anything! Let me know in the comments if she does have a version of Eve’s pudding and, if you’ve made it, how it was?

I ended up settling on adapting the recipe from the National Trust book of English Desserts. I reduced the overall sugar content of the recipe as it seemed quite sweet. I also included yogurt and ground almonds in the cake batter to make it extra moist and soft.

As per many old English recipes, apparently the original recipe called for lard or suet as the fat (plus the pudding was steamed, not baked!). However, most modern recipes use butter. If you don’t want to use butter, the recipe works perfectly with margarine e.g. stork.

This cake is quite a flexible one in that you can easily change up what stewed fruits you use in the bottom layer (along with different spices/flavourings). My mum has historically gone for apples stewed with whole cloves (she picks out the cloves after simmering the apples). She’s also used rhubarb before, which is genius since it’s quite a watery fruit which benefits from a pre-cook before baking with the cake batter.

If you want to use rhubarb in this recipe, replace the apples with 700g rhubarb, cut into ~4cm lengths. Stew them with 100g of sugar and 1 tbsp water, stirring occasionally, until the rhubarb has broken down into a compote.