Damn, that’s a long title, but I think that the cookie deserves it to be honest:

You can make yourself a deep-dish, semi-healthy (I used coconut oil, whole wheat flour, bittersweet chocolate and maple syrup. No white sugar or butter!) cookie/blondie thing for only you (so you don’t end up eating a million cookies), it basically only takes 15 minutes and one dish (you mix it up in the dish it’s baked in). So we’re doing this, yeah? You’re in. Good. Step by step I’ll take you through the ‘anatomy’, if you will, of this cookie:

–Deep-dish: well, that’s what it is, it’s baked in a dish, that’s deep for a cookie! It’s more like eating a blondie to be honest, but that doesn’t sound as good..
–Single-lady: it makes enough cookie for one single ladeh, i.e. single serving (if you baked it like a cookie, it’d probably be like 2 medium cookies..that’s one serving right!? right?)
–Salted: salt in it, salt on it. Salt. As we all know, salty-sweet is delicious and has to come up at least twice a month.
–Whole Wheat – I used whole wheat flour! Who would have even guessed? Just making it a little bit better for all of us 😉
–Chocolate chip cookie – …I think you’ve got that
–Vegan – not an egg in sight! I also used coconut oil to keep it vegan, but if you’re a butter gal (I totally normally am) go for it, I’ve tried it and it’s just as awesome.
–Gluten free variation – right, so I tried the recipe out just straight up substituting ground almonds for flour. It didn’t work out. It was incredibly delicious but more like eating caramel rather than a cookie. So I made a few changes; reducing the sugar and using almond butter instead of coconut oil (less fat = less gooey, I figured), and oat flour (just ground up oats) and it worked!
–Peanut Butter Cookie variation – following on from those gluten-free adaptations to the original recipe, I used peanut butter instead of almond butter, to make a peanut butter cookie! Wooh!
-The gluten free, nut butter variation can be made using whole wheat or a.p. flour too, it’s just not as gooey as the coconut oil version. I have been testing and eating these all week.

But that’s not all I’ve been doing!

It’s been a very busy half term,

I went to the Brits! I saw JT make a dramatic entrance with a chandelier-curtain-thing, I shuddered through One Direction’s song, Mumford and sons and Muse played kick ass songs and I noticed that undeniably sassy look on Taylor Swift’s face when she ended ‘I knew you were trouble’ (Harry Styles was the room…it was majorly awkward),

I went to the after party; I got free cotton candy (the guy who was making it had cotton candy ALL OVER HIS FOREARMS. It was hilarious.) and a white chocolate skull from some insane doctor actor. However the party full of mid-30-year-olds awkwardly dancing to remixes of the black-eyed peas, so we left after half an hour.

(side note: is it possible to be in love with a photo? WHY DOES THIS HAPPEN EVERY WEEK. At least now my friends know what my phone, computer and ipad background will be until next Sunday.)

I made another food video (the one at the top of the page!), finally!

and a song-c0ver video with these chicas,

I made 2-dozen cupcakes (you can see them in the background of the video at one point), and 2 sheet cakes for my brother to sell at his toastie stall at a festival launch party.

and now you can finally get the recipe,

Gahd Izy, why does it take you so long to do things?

I’m just a procrastinator and tension builder, what can I say… -If using a neutral liquid oil instead of coconut oil or butter, you can skip the melting-in-the-oven step.

-You can make the cookie dough and leave it (covered) in the fridge for up to 3 days before baking (it improves the flavour too, as we well know!)

-You can safely reduce either the sugar or maple syrup by 1 or 2 tsp, it just won’t be as soft or sweet (I like the dough sweet because I use really bitter chocolate)

-You can sub baking powder for baking soda

-If you use ground almonds and baking soda in the gluten free variation, it’s grain free! 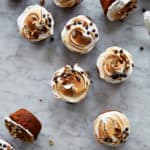 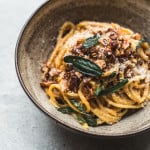