Sooo two coconut posts in a row… I hope you’re on-board this coconut-obsessed train because I am 100% there and will pull you along with me.

I always feel like I’m in the minority by liking coconut – bountys are ALWAYS the chocolates that are leftover from a box of Celebrations. I mean, I’m not upset about that fact because I could eat my weight in them given the chance. But I think it’s a ‘marmite situation’ where you either hate coconut or you really really like it. I am one of those coconut-crazy people.

Which is why when I got the chance to read through Emily’s new book (!!) Rawsome Vegan Baking, that I KNEW that I would be making these raw vegan coconut treats asap.

Come on, a healthy version of candy that I can actually convince myself is good for me. No weird additives or anything.

That means it’s okay when I eat 4 in one go right? Its nourishing my body, guys. Nourishing candy. Enough said. Lucky for you lovely readers, I’ve been generously given the opportunity to host a giveaway!! That means you can win a copy of Rawsome Vegan Baking alll for yourself. It’s an amazing book full of wholesome, simple recipes that are to-die-for (how good does raw Maple Pecan Pie sound??! What about raw Oreos or Tahini-Coffee Cream Cups?).

Side note: That reminds me, I recently realised that I haven’t eaten an oreo in like 6 months. How INSANE is that? (Let’s ignore the fact that I ate cookies & cream gelato yesterday…) (The giveaway is open to residents of the US)

The giveaway ends on the 23rd of March at 12am (London time), when winner will be randomly selected, announced on here in the Rafflecopter box and contacted via their provided e-mail address shortly afterwards. Bonus treat! I’m also sharing the recipe for these raw almond joys which Emily has SO CLEVERLY made healthy.

The recipes I’ve seen before for homemade almond joys usually involve using a heck load of sugar to bind the coconut together into a sticky dough. What this recipe does instead is essentially use half of the coconut to make coconut butter (I ended up making extra coconut butter at the time because I wanted it for shnacking! Coconut butter is mega good on toast. You can follow suit, I’m not judging.) which binds together the rest of the coconut along with some honey.

Being someone who can’t leave recipes alone, I added a pinch of vanilla powder too for flavour and super pretty speckles 🙂 I hope you’ve got your blenders out already. This recipe is stellar.

And if you want to check out more of Emily‘s raw, vegan recipes go visit her blog This Rawsome Vegan Life (Prewarning: you might actually get stuck on there for a few hours admiring her awesome recipes and pictures.) – Below is the original recipe from Rawsome Vegan Baking by Emily von Euw (called Almond Joys with Crunchy Coconut Center Enrobed in Raw Chocolate). I made a few small tweaks/have substitution suggestions which are listed here, before the recipe:

– I used unrefined, virgin coconut oil instead of cacao butter in the chocolate coating and it worked fine!

– I used raw honey as the liquid sweetener in the chocolate coating (making the coating not vegan). If you want to make it vegan either use maple syrup (which is not raw) or agave nectar.

– I used a 30 ml cookie scoop to portion the coconut centers into smaller portions instead of just dividing the mixture into 6.

For the chocolate coating:

For the coconut center:

To make the chocolate:

To make the coconut centers: 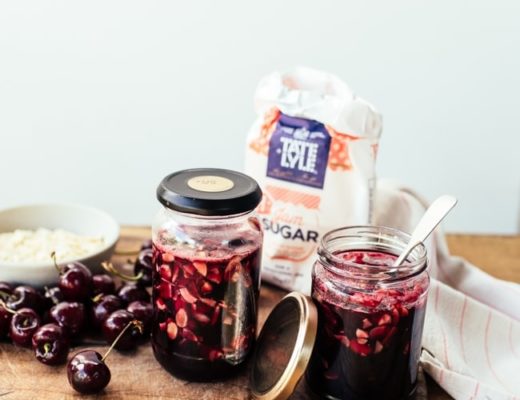