how can it be legal to have a day dedicated to pancakes, eh? Too good to be true. I can/will eat pancakes for all meals EVEN if they are actually crepes (I have talked about my pancake/crepe opinions before: they are different things. They have their own good qualities…buut pancakes totally win over crepes IMO).

I want to say that I’ll be motivated enough to wake up tomorrow and make some pancakes for myself buuut let’s be honest: I’ll end up giving in to the extra 15 minutes of being buried under my duvet….

Then there’s a 90 to 95% chance that I may make up for the lack of breakfast pancakes by having after school pancakes topped with a scoop of this coconut milk ice cream.

I mean if pancake day can be a thing, why can’t it be pancake (with ice cream) day?? That brackets make the ice cream implied so it’s okay, I think.

I finally gave in to the whole coconut milk ice cream thing and I am soooo smitten. First of all I find coconut milk naturally sweet so it means I barely had to add any syrupy stuff to the mixture. Secondly I didn’t have to even turn on the stove to make it, I literally stirred the ingredients in a bowl and poured them straight into the ice cream maker. What a win.

Ughgh why did no one tell me that this is so awesome!? I wanna live in a coconut world, man because side note: whipped coconut cream is a thing that is delicious and amazing, too.

As some one who’s verrry texturally sensitive (that is a thing, isn’t it?) food-wise I sprinkled a toasty pistachio crumb onto the ice cream for some crunchy variation and some uplifting, spring-y colour.

It’s perfect for the days when it almost doesn’t rain and feels like warmer weather might actually be on its way… A feeling that I’ve only had about 3 times in the past month. But hey, that leaves me with more ice cream for Pancake ( with Ice cream) day, RIGHT!? Also guys, I collaborated with West Elm on this post (we have a West Elm in London now YAY!). You can see the recipe on their blog, Front & Main, here with links to all of the pretty, pretty props that I used from their store 🙂

I’m going to have 3 more spring recipes that’ll be up on my blog and their blog over the next few weeks, too.

If you’re in London btw there’s an Etsy Pop-Up event going on this Thursday at the West Elm (which Ima be visiting…because of a) cake but also b) cute prop things).

To make the ice cream:

To make the pistachio crumb: 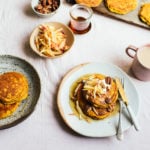 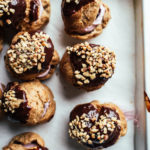