It’s no secret that it’s Autumn now – it’s already getting dark and cold at 4 pm, I’m constantly wearing jumpers, Starbucks has brought the Pumpkin Spice Latte to the UK, and Whole Foods has a huge stack of Libby’s Pumpkin tins piled up. I’ve never usually been one for following themes – But, after being bombarded by images of delicious pumpkin type things on the internet, the idea of pumpkin was really starting to appeal to me. Then I saw the new pumpkin spice latte in Starbucks,  and decided to take the flavour combo (pumpkin, coffee, pumpkin pie spice), and make it better by (of course) adding carbs into the mix. Specifically, the bread kind. Soft, pretzel-y bread. Oh yeah, and then I coated them in browned butter. Sassy. There’s spice mix in them, spice mix on them. Then comes the coffee cream cheese icing.

A rogue sprinkling of pecans. -Not a fan of coffee? Just sub it for 1 tbsp of warm water!

Tip the entire contents of the large bowl out onto a work surface. Knead together for about 10 minutes, gradually adding the 1/3 cup of flour, using it to stop the dough sticking to your hands and the work surface, until you get a smooth-ish, slightly sticky dough. Pop the dough into a lightly oiled large bowl, turning it to coat, cover with a clean tea towel . Leave to rise in a warm place for 1 hour-ish until doubled in size.

Divide the dough into 10-11 equal pieces (roughly weighing 3 oz each) and roll into balls. Dip the bottom of the dough balls lightly into some flour to stop them sticking to the work surface.

Roll each dough ball into a rope about 20″ long.

Shape into a U, cross the ends of the U over each other and fold down to make the pretzel shape.

Combine the hot water and baking soda in a jug, then pour into a shallow bowl. Dip the pretzels into this mixture and place onto a parchment-lined baking tray. Leave to rest while you preheat the oven to 425 degrees F (210 degrees C). Once preheated, bake the pretzels for 7-10 minutes, rotating the tray 180 degrees, halfway through baking, until golden brown.

While the pretzels bake, brown the butter: melt the butter, and continue to cook over a medium heat until it foams up and brown solids appear at the bottom of the pan. Take it off the heat. Combine the granulated sugar and spice mix in a large shallow bowl.

Brush the pretzels all over with browned butter, then coat with the spiced sugar mixture.

Combine the powdered sugar and cream cheese in a small bowl. Add some coffee, little by little until you get a drizzle-able icing, and drizzle over the spice-sugar coated pretzels. Top with chopped pecans, if you want them. Store in an airtight container – they’re best eaten warm 😉 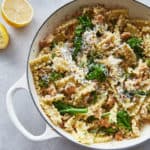 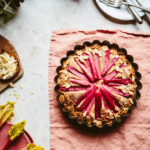 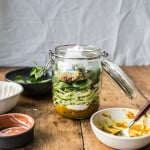 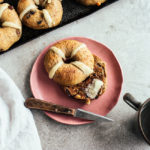