I know this may sound ridiculous but often when it comes to hot cross buns, we can’t finish the whole batch of 12 before they go stale! Yes, I can then use them for an Easter French toast or bread & butter pudding but sometimes I would just rather make a small batch of HCBs and finish them on the day they’re made whilst they’re at their best.

To me, a small batch of 4, plump hot cross buns is the perfect amount. It means me, my boyfriend and my dad can have one each when they’re fresh from the oven. Then someone (probably me) can have the last one for breakfast the next day. That’s why I’ve made this recipe! It’s really an ideal number of HCBs for 2-4 people to finish quite rapidly. 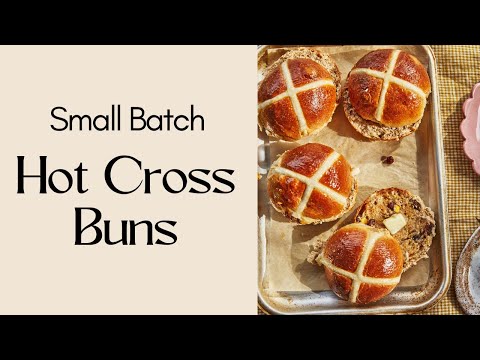 *The Windowpane Test: when kneading bread doughs, the easiest way to tell that the gluten has been sufficiently developed is the windowpane test. Take a small piece of dough and gently stretch it out between your fingers until it’s thin enough to see the silhouette of your fingers through when held up to the light. If it breaks before it reaches this point, it means you have some more kneading to do! (See the video in the recipe card for a reference to the windowpane test). Extra flavour in the dough: you can add the finely grated zest of 1/2 orange and 1/2 lemon to the dough. Just mix the grated zest in along with the flour. More dried fruit: these buns aren’t very heavy on the dried fruit. You can boost the fruit content by using 150g of dried fruit (110g raisins + 40g chopped candied citrus peel) instead. Slightly smaller buns: these buns are made with just over 100g of dough each – this makes them bigger than a standard supermarket HCB! If you’d rather have slightly smaller buns, split the dough into 6.
Tried this recipe?Let me know how it went! Mention @izyhossack or tag #topwithcinnamon!

The glaze is really for appearance mainly as it will make the buns looks nicely shiny. I personally prefer them unglazed as the glazes can make them annoying to toast (the glaze can catch and burn in a toaster quite easily so you have to toast them in the oven instead). They also will make the buns sticky to the touch which can be unpleasant! So, if you don’t want to glaze the buns, don’t feel like you have to.

I’ve found mostly that hot cross buns are glazed with apricot jam which has been warmed in a small pan until loose. I think apricot jam is the most popular as it has a mild flavour and quite a neutral colour but you could use any other jam. You can also use something like maple syrup or golden syrup, heated until it has reduced slightly so it is more sticky.

Mixed spice is actually quite a lot like pumpkin pie spice so if you’re in the USA, that’s probably the easiest substitute to use.

How to eat hot cross buns

When they’re freshly baked, you can split them in half and eat warm with salted butter and jam (I like apricot jam!). Once they’ve cooled down, you can split them in half and toast them before topping with the jam/butter. As these buns are glazed they can cause issues with a toaster. Because of this, I prefer to toast my HCBs on a tray, in the oven with the grill setting on – just make sure you flip them over so both sides get toasty AND keep a close eye on them as they can burn FAST.