Using mashed potatoes in the dough of these cinnamon rolls creates a SUPER fluffy texture and helps the buns stay softer and moister for longer. They’ll still be best on the day they’re baked but are still delicious on the following days, especially when warmed back up in the oven for 10 minutes.

Usually, enriched yeast doughs rely on additions of fat (mainly butter) and/or eggs to produce a light, fluffy texture. When making vegan doughs we can substitute the butter easily for a vegan butter but the eggs can be a difficult one to replace properly. They help add moisture to the dough and provide structure whilst not making the baked bread too firm.

Adding cooked potatoes is a great way to replace the eggs as the starch in potatoes can bind more water than wheat flour can and thus holds more water in the dough, producing a soft, tender texture. The other advantage is that potatoes are cheap, readily available and quick to prep.

Due to the inclusion of the mashed potato and vegan butter in this dough, it is quite sticky. The easiest option here is to knead the dough in a stand mixer with the dough hook attached however I know most people don’t have that option. And it’s unfair to not be able to make cinnamon rolls just because you don’t have a piece of fancy kit!

SO to knead by hand you can do this two different ways:

folding the dough over itself and pushing forward in a repeating movement until the dough passes the windowpane test (more on that below). You’ll have to continuously be dusting the dough with a LIGHT sprinkle of flour to stop it sticking to everything – make sure you’re incorporating as little extra flour as possible.

This is a better method for kneading wet doughs as you don’t need to add extra flour: lift the dough up, slap it down on the counter very firmly and fold it over itself so it folds in half. Pull your hands out then lift the dough up again and repeat this. The dough will start to stick to the countertop and your hands – this is fine! You may need to occasionally ‘reset’ by using a bench scraper to scrape everything into a neat ball again & rubbing the dough off your hands. You repeat this action until the dough passes the windowpane test. It should also gradually get less sticky as the dough approaches being done. See video above to help.

How do I know when bread dough is properly kneaded?

Most recipes for bread dough will tell you to knead until the dough is less sticky and appears smooth. Whilst these can be helpful indicators of gluten development (i.e. the goal of kneading dough) you can do a better test to your dough to see if it’s ready: the windowpane test.

To do this, break off a small piece of dough around the size of a walnut shell. Flour your hands if the dough is super sticky. Gently stretch the dough between your fingers until it’s thin enough to see your fingers through when held up to the light. If it breaks before you get it thin enough do this, you know you have some more kneading to do! See video above to help.

It’s inevitable that some of the gooey cinnamon-sugar-butter mixture will seep out of the rolls as they bake but there is an addition which can make the filling a little bit thicker so more likely to cling to the inside of the rolls: cornflour (i.e. cornstarch). By mixing some into the filling, the cornstarch will gelatinise as the rolls bake, thickening the filling slightly. If you bake the rolls in a deep baking dish instead of on a baking tray, you’ll also find that the goo has less space to spread into so the cinnamon rolls will seem to have more filling inside.

To make the filling easily spreadable you’ll need your vegan butter to be well softened. If, like me, you usually forget to do this, you can mix a splash of boiling/very hot water into the filling. This will loosen it up just enough to make it spreadable.

A note on yeast:

I prefer to use instant yeast (a.k.a. easy-bake yeast) which can be mixed straight into the dry ingredients. If you can’t get this type of yeast, make sure you read the instructions on the yeast packet to check if it needs to be combined with water before being mixed into the dry ingredients. If this is the case, just mix your yeast into the potato-butter-water mixture before adding to the flour mixture. 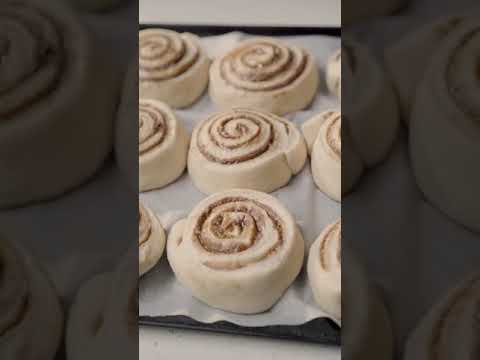 Windowpane test: take a small piece of the dough and stretch it until its as thin as you can get it. The dough is ready when it can be made thin enough to see your fingers through it without breaking (see video in blog post).  Make in a stand mixer: make the dough in a stand mixer with the dough hook fitted, kneading on medium speed until the dough passes the windowpane test.  Pearl sugar: you can sprinkle a bit of pearl sugar onto the buns before baking if you like. This is a bit of a speciality ingredient but you can find it online quite easily.
Tried this recipe?Let me know how it went! Mention @izyhossack or tag #topwithcinnamon!