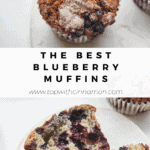 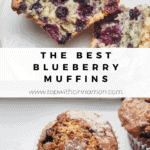 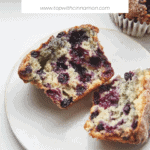 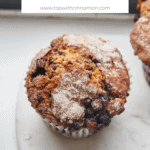 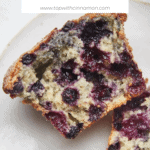 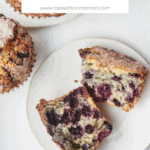 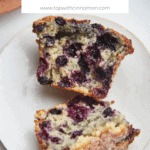 My mum (who’s American) was the blueberry muffin baker in our house. She’d sometimes make that internet-famous ‘Jordan Marsh from scratch’ recipe for weekend breakfasts and – between the 4 of us – the whole dozen would inevitably be gone by Sunday afternoon. She taught me how to make them as well and through my own trials and internet reading, I’ve come up with my best blueberry muffin: soft & fluffy (not tough), not too sweet & packed with blueberries but not soggy!!!

I’ve got a few secret ingredients up my sleeve too which make these taste SO blueberry-y (almost like a Starbucks muffin?!). Lastly, they’ve gotta have the crunchy cinnamon-sugar on top (DUH!) – fun fact, that’s the reason my site is called Top with Cinnamon – it’s because I loved the cinnamon topping on blueberry muffins (and coffee) so much.

My secret ingredients for these blueberry muffins:

This muffin recipe contains all the usual suspects – plain flour, butter, eggs & granulated sugar. I use baking powder & soda to leaven them but you can just use self-raising flour instead if that’s what you’ve got. I make them without vanilla extract as I find it redundant when using my secret flavour boosting ingredients (however if you’re not adding the secret ingredients, you can whack 1 tsp of vanilla extract in the batter!).

I use a couple of secret ingredients which really enhance flavour of the muffins (but which can also be easily replaced, although the substitutes just won’t give as much flavour).

Fresh or frozen blueberries – which is better?

I always opt for frozen blueberries when baking muffins. You need to mix them into the batter still frozen (so DON’T thaw them!). I like frozen ones for a few different reasons:

Now all that said, you CAN use fresh blueberries in your muffins. You just need to follow the directions in the heading below.

How do you stop the blueberries bleeding when mixing into the batter?

A lot of the time when you’re stirring blueberries into batter, they’ll ‘bleed’ causing the batter to discolour and turn purpley-blue. You can remedy this by tossing the blueberries in a bit of flour before mixing them in and ALSO by stirring gently. Using frozen blueberries helps too as they’re less likely to squish when stirred. However’ I’ve found that even if they do bleed when mixing, the purple batter will usually revert back to a cake-y colour once baked so don’t panic if your batter turns blue!

How do you stop the blueberries sinking?

Are these vegan/can they be veganised?

Whilst this muffin recipe isn’t vegan (it contains eggs & dairy) you can easily veganise it. Replace the butter with melted vegan block butter. Replace the yoghurt with a soy-based, dairy-free yoghurt. Replace the eggs with 2 tbsp ground flax seed mixed with 6 tbsp hot water, mixed in a small bowl and left until gelatinous, before adding to the batter.

You can store blueberry muffins at room temperature overnight – they’ll last like this for up to 4 days. Just keep them in an airtight tupperware box and they’ll stay moist & delicious. You can even warm them up in the oven (180C/350F for 5 minutes) or microwave if you prefer.

As for freezing them, just pop them into a resealable sandwich bag and freeze for up to 3 months. You’ll want to let them defrost at room temperature overnight before eating, though.

No butter? use 100g vegetable oil or melted coconut oil instead and add an extra tablespoon of water to the batter No baking powder/soda? Use self-raising flour instead of the plain flour No yoghurt? Use buttermilk or sour cream instead. If you don’t have those either, use an equal amount of milk mixed with 1 tsp vinegar and let it sit until curdled before adding to the batter. Vegan: use melted vegan butter, use a soy-based yoghurt & use 2 tbsp ground flax seed mixed with 6 tbsp hot water instead of the eggs.
Tried this recipe?Let me know how it went! Mention @izyhossack or tag #topwithcinnamon!