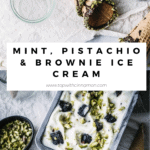 Hola! I’m in Spain atm, which is why my pinterest/instagram have stopped for the week, but thanks to the funky internet world I’m able to pre-write a post that can be automatically published whilst I’m away.

I can tan and you can look at ice cream photos. Like a LOT of ice cream photos (there were more, I didn’t think you’d be too thrilled if I uploaded them all..) It’s a win-win situation. I had the pictures of this ice cream on my instagram a while ago, I don’t think anyone guessed the final flavour. It’s pretty obvious that it’s pistachio, and brownie. But it’s also MINTY!

Pretty much a mix of my three top flavours – mint choc chip, pistachio and brownie.

Also side note: my recipe makes such a good amount of brownie chunks, I think about 3 or 4 brownies worth. So you don’t have to do the ‘dig-through-the-container-to-find-and-eat-all-the-brownie-chunks’ thing that I um.. totally don’t do….. :/ I was also a keen bean and dipped the ice cream cones in chocolate (70 percent ofc, who do you think I am) and chopped pistachios. I haven’t included this step in the actual recipe, because I think it’s pretty easy to tell how  and what I did. Plus I doubt anyone is as keen as me to decorate their ice cream cones. So also what happened when I was shooting this was that the ice cream started to melt majorly quickly (we’ve been having a heat wave and I am not adapted to deal with this heat. Nor is the ice cream). Then the random chocolate that I’d drizzled onto the ice cream just literally fell off.

You can see it in the above photo. It looks like a spider. I think it’s cute. I also now want to make more chocolate-pistachio spiders. Don’t judge, they are delicious. For the olive oil fudge brownies: 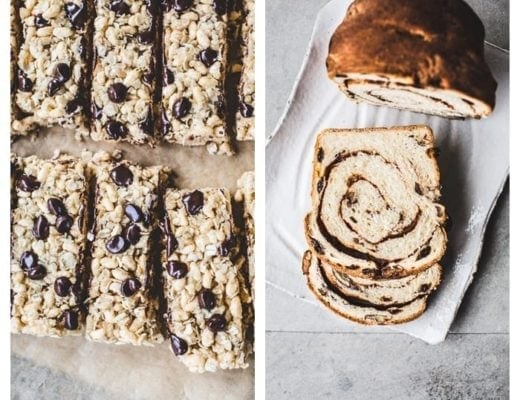