a.k.a the most sophisticated loaf cake you’ll ever eat. (There’s poppy seeds in there too – HELlo – but that would make the title even longer than it already is).

The loaf cake started out as an idea for a flavour pairing whilst I was drinking a cup of Earl Grey. It has always been my favourite tea – there’s something so dreamy about the aroma, exuding calmness and comfort. As it has a bunch of flavours going on in it too, it makes an ideal tea for infusing into foods, too! Hooray!

At first I tried straight up throwing tea leaves into the batter – it didn’t really do much though. The flavour wasn’t very strong so it kind of got lost behind the lemon zest I’d added to the batter (lemon/orange are best friends with Earl Grey). I thought that my craving for an Earl Grey baked good was a lone venture, but I put a pic of the cake on instagram and I was pretty surprised that quite a few people were equally enthused.

I decided to not give up on the cake, and tried another round of lets-try-to-get-tea-into-my-cake. SO I tried a) reducing the sugar, b) increasing the butter (fat is flavour, yo) and c) actually adding brewed tea (very, very strong tea) and the leaves to the batter. It worked!

Having my tea and eating it too. Double TEAm. Hah. I crack myself up – probably only myself though.

Side note: I blame that on my friends for telling lame jokes around me too often. One of them keeps pulling a spare button out of her pocket and dropping it when she picks things up and yelling ‘BUTTON FINGERS’.

AND I CAN’T STOP LAUGHING. Ohkay, back to cake story time.

I also put in blueberries the second time round because when baked the berries get that aromatic scent that is EXACTLY what the tea has going on. Talk about dream team, this trio of lemon, tea and blueberries rules. Lastly I glazed the cake with a tangy lemon glaze just because YOU CAN”T STOP ME from doing that when there’s lemon in ANYthang. I will glaze it behind your back if you don’t let me. Lemon glaze is the best.

No sir, I’m not dipping the slice of cake that I’m about to eat into the bowl of glaze. 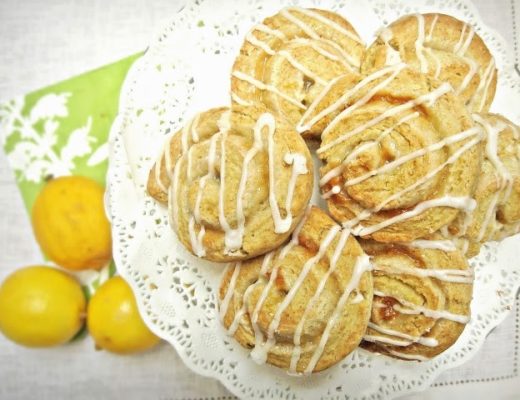