This creamy, vegan ‘cheese’ sauce is the perfect base for steamed cauliflower and broccoli to reinvent the British classic Cauliflower Cheese. A crispy topping of breadcrumbs makes it even better!!

The sauce is based off of one by Kenji at Serious Eats – I changed it to suit my tastes and I’ve used it multiple times now to make vegan mac and cheese. I think the addition of a few key things really helps. Firstly, the potato helps give the sauce a thickness and stretchiness that you can’t get from a flour-based roux. It’s the blending action on the potato that really makes this work. Secondly, adding a bit blob of something salty & savoury – my favourite is marmite and I have to say, I haven’t even been the biggest fan of marmite in the past. This sauce has changed my mind. Lastly, a bit of acidity & sweetness from the mustard (I use the French’s yellow mustard as it’s quite neutral but sweet) and apple cider vinegar. All of that together helps to create that faux cheesy effect and without having to resort to using pre-made vegan cheese (most of which smells kinda weird).

Anyway, I used this for a vegan Christmas dinner I did last year for my friends and it went down super well with everyone! I added the breadcrumbs for a crispy top but if you’re coeliac, just leave them off or use GF ones instead!

For the vegan 'cheese' sauce:

For the 'cheese' sauce:

Use gluten free breadcrumbs for the topping

Have you made this recipe?﻿
I’d love to see how it went! Tag me on instagram @izyhossack and hashtag it #topwithcinnamon so I can have a look & reshare in my stories! 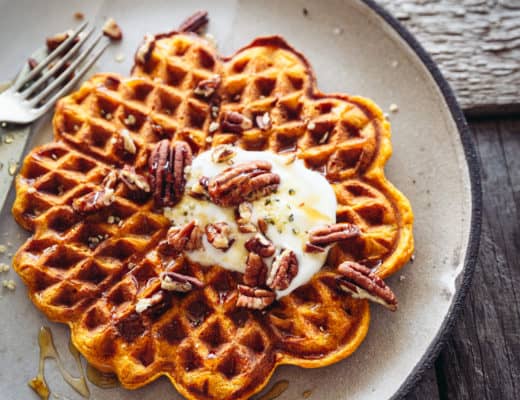