I’ve had a few recipes up around the web recently! In the pre-and-post-birthday mayhem I haven’t had time to write about these magical birthday breakfast buns yet (photos and recipe coming shortly, though). However while you wait for all that spicy, buttery goodness why not check out my other recipes after the jump! – How to make Coconut Yogurt at Home!  – The Kitchn: This was a massive project I undertook for 2 weeks. I dominated a whole shelf of the fridge with jars of yogurt haha. I’d only made coyo one way before this but experimented with tonnes of different methods to come up with as much information and variation as I could. The recipe is fully vegan, too 🙂

– Blueberry Pie Overnight Oats – The Kitchn: This is a recipe following on from the coconut yogurt post as coyo is used in the oats to make them creamy and coconutty! There’s also oaty ‘pie crust’ streusel action going on there 😉 (P.s. there will be a few more related recipes to follow on The Kitchn using the coconut yogurt)

– Dutch Baby Pancakes – Great British Chefs: I made these dairy free by using almond milk in the batter and coconut oil in the skillet. The result was a slightly coconutty flavour and a texture in between a crepe and a Yorkshire pudding. They’re absolutely delicious and if you haven’t made them before I urge you to do it!

– Flourless Lemon Cake with Rhubarb Compote – Great British Chefs: Yes, I’m obsessed with lemon cakes. This is one of my favourite variations because of its deep yellow hue and lovely flavour thanks to the cornmeal. Oh, and the whole thing is soaked with a bunch of lemon syrup so it’s ridonc moist and a liiiitle bit sticky. As forced rhubarb is in the supermarkets atm, I also made a simple, bright compote to serve with the cake. 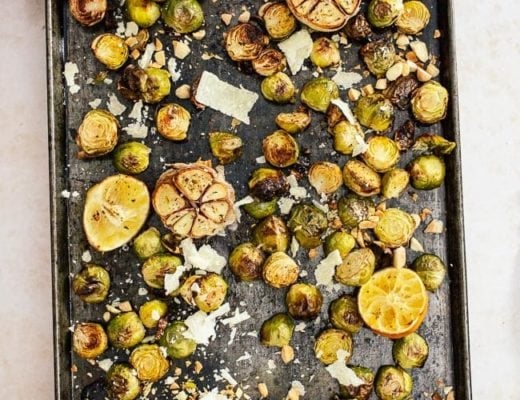